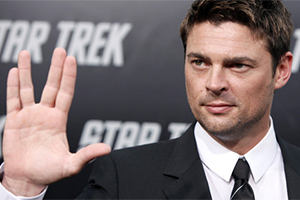 Kiwi charity KidsCan is $160,000 better off, thanks to the kind-hearted actions of Hollywood star Karl Urban. The acting hero - a KidsCan ambassador alongside Mike McRoberts, Miriama Smith, Mike Allsop and Will Hall - secured the funds for KidsCan through US movie charity organisation Omaze.

Omaze has been running a fundraiser, dubbed "To Boldly Go", in association with Urban's next Hollywood blockbuster, Star Trek Beyond.

Urban is now filming the movie, set for release next July.

During the campaign, bidders offered big bucks to meet the cast and spend time on set, including visiting the bridge of the Starship Enterprise. A cool $1 million was raised and some of the movie's stars chose which charities benefited.

The charity's chief executive officer, Julie Chapman, told Spy: "We are incredibly grateful Karl continues to be so generous and we see him as a great role model for the children we support.

The $160,000 will enable us to meet the needs of a greater number of Kiwi children living in hardship. There are 30 schools [with more than 2337 kids] waiting for KidsCan support."

Star Trek Beyond will be Urban's third outing in the popular sci-fi series, in a leading roles as Dr Leonard "Bones" McCoy.